The most important question is, "How well does Slackware ARM Linux run on the Raspberry Pi 3 Model B+?"

First of all, let's take a look at the Raspberry Pi 3 Model B+ and what it has to offer.

NB: The official word on power consumption from the Raspberry Pi Foundation is, "Note that Raspberry Pi 3B+ does consume substantially more power than its predecessor. We strongly encourage you to use a high-quality 2.5A power supply, such as the official Raspberry Pi Universal Power Supply."

So, to encapsulate; What's termed as "Faster Ethernet (Gigabit Ethernet over USB 2.0)" might be "faster" than its predecessors but it's certainly *not* anywhere near gigabit Ethernet speeds, even by the RPi Foundation's theoretical pseudo-gigabit standards! As a result of the increase in overall speed of the CPU and networking, and other enhancements and upgrades, significantly more power is required in order to operate the device in comparison to the Raspberry Pi 3 Model B. 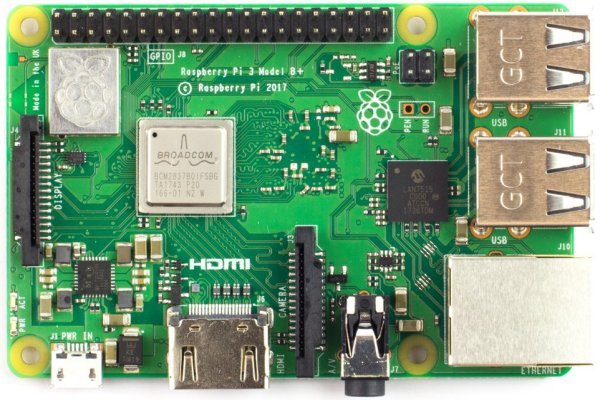 This new device looks very much like the Raspberry Pi 3 Model B. So, no surprises there then. It has the same layout and design. It fits into any existing Raspberry Pi 3 enclosure, having the same mechanical footprint as the RPi 2/3 Model B. It's got the same amount of [1GB] DDR2 RAM @ 900MHz. It has the same VideoCore IV GPU @ 400 MHz. You'll find the same 4x USB 2.0 ports, HDMI 1080P socket, audio/composite jack socket, 8P8C Ethernet port, camera (CSI) port, display (DSI) port, and micro-B USB power socket, that feature on the RPi3 Model B. All of the connectors are in the same place with the same functionality, and the board is of course powered via the now familar micro-B USB power socket (or GPIO pins, or Ethernet port, whichever you prefer) and requires a 5v/2.5A rated supply. It does not incorporate the same advanced power-saving features as the RPi2 and Rpi3. Much the opposite in fact. It uses way more power in comparison! 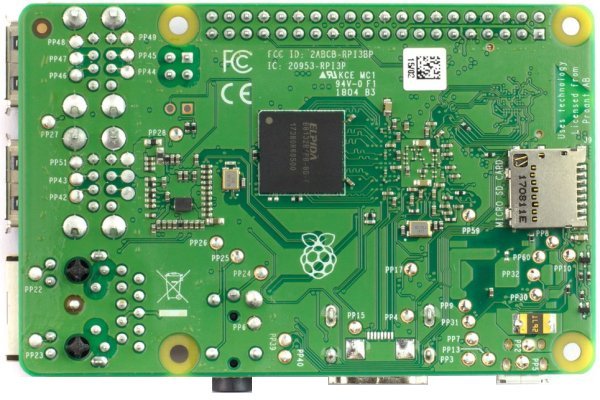 So, it would seem that the overheating SoC problems which dogged the Raspberry Pi 3 Model B have been addressed by the new addition of a metal plate shroud, which the RPi Foundation terms as a "heat spreader", to try and deal with any thermal issues. The official explanation for the "heat spreader", along with incorporating some new power integrity optimisations in the BCM2837B0 SoC, is to ensure that the device can reach higher clock frequencies, or at higher temperatures (i.e. +80°C) to run at lower voltages to reduce power consumption, and to more accurately monitor and control the temperature of the chip. This can be seen as a step forward and certainly more astute this time around than the Raspberry Pi Foundation's opinion was in 2016 that no additional thermal solution was required for the normal operation of the Raspberry Pi 3 Model B device. [Define 'normal': citation needed] Whether or not any additional thermal cooling solution is required on the Raspberry Pi 3 Model B+ (e.g. heat-sink and/or fan) has yet to be ascertained.

The RPi3B+ features an upgraded Microchip LAN7515 Ethernet controller which is also a USB 2.0 Hub controller. While the USB 2.0 connection to the application processor seriously limits the available bandwidth, the RPi Foundation estimates that you will still see approx. a threefold increase in throughput compared to Raspberry Pi 3 Model B.

You may be more than just a little perplexed when trying to comprehend how the Ethernet (LAN) data throughput speeds can be referred to as 'gigabit' when it's piped through the USB 2.0 bus. Well that's quite understandable when the Rapberry Pi Foundation have stated on their website "Faster Ethernet (Gigabit Ethernet over USB 2.0)" and then saying in their official YouTube video regarding RPi3B+ wired networking that it's "pseudo-gigabit" (i.e. NOT gigabit) where you can expect an approx. 2-3 times increase in data throughput speeds. Oh, and that they're definitely *not* mentioning the "G-word"! Then again on their website it's stated, "Microchip have supported us with an upgraded version, LAN7515, which supports Gigabit Ethernet." giving the impression that the RPi3B+ is gigabit Ethernet (LAN) capable. If you're confused, don't worry. You're not going crazy! Perhaps someone over at the RPi Foundation might bring some well needed clarity to this equivocation. Unless it's intentional for marketing purposes. :-D

So, the LAN7515 controller does support gigabit Ethernet (1,000,000,000 bits per second) but is restricted in speed, because it's bridged over USB 2.0, which means it will *never* achieve anywhere near gigabit data throughput speeds, as defined by the IEEE 802.3-2008 standard. The LAN7515 Ethernet bridge and USB 2.0 Hub controller is certainly faster than its LAN951x counterpart, but just how much faster depends on a vast number of fluidic variables. Don't feel disappointed if you're not hitting 300Mbps LAN data throughput, or close to it.

Dual-band 2.4GHz and 5GHz 802.11b/g/n/ac wireless (WLAN) and Bluetooth 4.2 (incorporating BLE) are provided by the Cypress CYW43455 chip, connected to a Proant PCB antenna similar to the one used on Raspberry Pi Zero W. Compared to its predecessor, the Raspberry Pi 3 Model B+ promises to deliver somewhat better performance in wireless networking throughput on the 2.4GHz band, and significantly better performance on the 5GHz band. 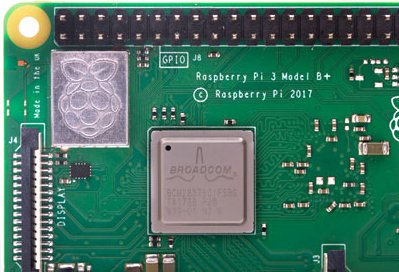 The dual-band WNIC and Bluetooth 'combo' chip comes with modular compliance certification and is encapsulated under a 'Raspberry Pi logo embossed' metal shroud. This has allowed the entire board to be certified as a radio module under FCC rules, which in-turn significantly reduces the cost of conformance testing Raspberry Pi-based products and time-to-market. The metal shroud also stops users from causing problems with the operation of the device by using flash photography, laser pointers, or similar equpiment in a photonic reset type scenario. If that was at all possible. ;-)

The Raspberry Pi 3 Model B+ now supports 'power over Ethernet' (PoE), which enables the device to be powered via the Ethernet (LAN) port. A 4-pin PoE header can be found on the board for this specific purpose. 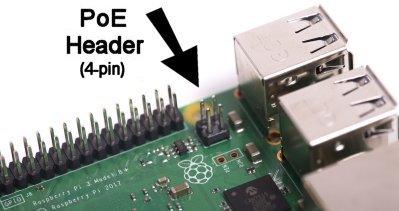 A separate PoE HAT is required in order to power the RPi3B+ via the Ethernet port. 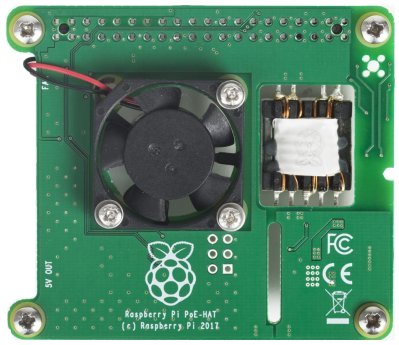 The Raspberry Pi PoE HAT powers a Raspberry Pi 3 Model B+ via an Ethernet cable. Power-sourcing equipment is required on the Ethernet network.

The Preboot Execution Environment (PXE) allows a Raspberry Pi 3 Model B+ that's not yet configured with an operating system to retrieve data from the network and run it. PxE boot is enabled by default, and so is booting from a microSD card. This means that the RPi3B+ will still boot from SD card first if you have one plugged in. If not then the PXE code on the BCM2837B0 SoC will search for a server on the network that uses PXE. If a server is found using PXE, it will send the RPi3B+ the name of the file (or a list of boot servers that contain available operating systems) to download and execute, which then runs the operating system.

The Raspberry Pi 3 Model B+ has different stages (modes) of booting. If you're interesting in finding out how these boot modes work, and which ones are supported for booting [Slackware ARM] Linux, see the following page: RPi Bootmodes

All things considered, the Raspberry Pi 3 Model B+ is a decidedly sensible first buy, and/or upgrade/replacement for any previous RPi version. In comparison to other ARM-based single board microcomputers, the Raspberry Pi 3 Model B+ for a frugal $35 (US) is a seriously *good* deal and one that's very hard to beat! It's also reported to be completely compatibile with the RPi1, RPi2, and RPi3 so your existing operating system(s) and software should all work the same.

How does Slackware ARM perform on the Raspberry Pi 3 B+?

"Slackware ARM runs flawlessly on the Raspberry Pi 3 B+, as expected. There are noticably less issues with overheating than previous revisions due to the thermostatically controlled SoC clock speed(s). Used as a desktop it's ok for simple things, like light website browsing or email. Opening a whole load of tabs on the browser will reveal how slow and sluggish the RPi3B+ becomes compared to a conventional Intel/AMD based PC, but still a lot better and more workable than any previous RPi model(s). The device is quicker to compile than on a RPi3B but not by a huge amount. The RPi3B+ is a neat, and inexpensive, tool on which to learn Linux and play around. It's a perfect introduction into SBCs and ARM devices for beginners."

"How does Slackware ARM perform on the Raspberry Pi 3 Model B+?" answered by

A: "Only if you will benefit from the new features (e.g PoE, 5GHz wireless) and/or the additional power and speed of the upgraded hardware."

There has been only one revision of the Raspberry Pi 3 Model B+ since its initial release date. The device is manufactured at Sony's facility in Pencoed, Wales.

To find out the hardware revision of your Raspberry Pi(s) use this command, as 'root' user, at the command prompt:

The currently available Raspberry Pi 3 Model B+ revisions are:

For further information on the Raspberry Pi 3 Model B+ see this link. For benchmark comparisons and more detailed hardware spec's see this link.