On closer inspection you'll see the RAM chip is no longer mounted on top of the SoC. It has been relocated to the underside of the board, and it's a 1GB chip. You'll also notice there's a new Broadcom BCM2836 SoC incorporating a quad-core 900MHz ARM Cortex-A7 processor with ARMv7-A architecture. The Raspberry Pi 2 has a new engine, faster and more powerful than before. This enables it to run the full range of ARM GNU/Linux distributions, which of course includes Slackware, with much greater speed and efficiency. The amount of RAM has been doubled to 1GB and runs at a clock speed of 450MHz, which is 50MHz faster than previous models. This was an area where the Raspberry Pi Model B and Model B+ were lacking due to their limited (and somewhat slow) single-core 700MHz ARM11 CPU with only 512MB RAM available. So this next-gen Raspberry Pi 2 with its quad-core CPU and 1GB DDR2 RAM is a beast in comparison and its capability and potential has increased exponentially. The Raspberry Pi Foundation have stated that the Raspberry Pi 2 is around 6 times faster than the Model B+. Even Microsoft have announced support for the Raspberry Pi 2 with their Windows 10 operating system. So that goes some way towards explaining just how much the Raspberry Pi 2 has advanced and differs in comparison to previous models while retaining full compatibility, identical functionality, form-factor, and price! 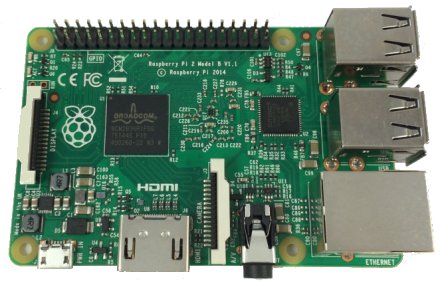 You'll find the same 4x USB 2.0 ports, HDMI connector, audio/composite jack socket, ethernet port, and power socket, as on the Model B+. All of the connectors are in the same place with the same functionality, and the board can still be run from a 5V micro-USB power adapter. Having the same form factor means the Raspberry Pi 2 fits into any existing Model B+ case or enclosure. It also incorporates advanced power-saving features with a variable CPU clock speed which drops the core from 900MHz to 600Mhz when idle. The best thing of all is that the Raspberry Pi has advanced from having a single-core 700MHz ARM11 CPU with 512MB RAM to a blistering quad-core 900MHz Cortex-A7 CPU with 1GB RAM and yet retains the same price as the Model B+.

"Is the Raspberry Pi 2 worth buying if you already have a Raspberry Pi Model B and/or Model B+?"
The answer is, "Yes! It's like going from a Fiat Cinquecento into a brand new Jaguar F-Type!"

To find out the hardware revision of your Raspberry Pi(s), use this command, as 'root' user, at the command prompt:

The currently available Raspberry Pi 2 Model B revisions are:

For those interested in further information on the Raspberry Pi 2 Model B see this link and for speed comparisons see the RasPi.TV - Raspberry Pi 2 Power-Performance page.